Aurory Project is a blockchain gaming studio and one of the pioneers in incentivized, blockchain-based gaming on the Solana ecosystem 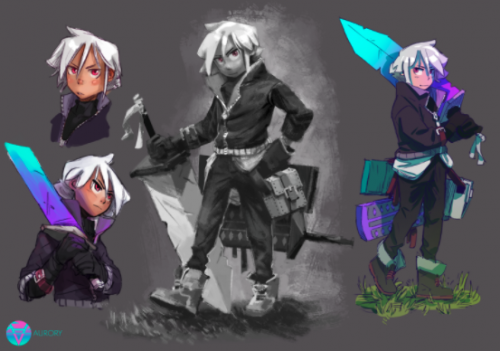 Aurory is a Solana-based free-to-play and play-to-earn role-playing game and NFT ecosystem. It is set in a retro-futuristic universe called Antik. It is a rich and diverse universe populated by Nefties. These magical creatures are designed as NFTs which can be caught, evolved, used in battle and traded on the marketplace.

The game will have two major game modes: a story-driven single-player mode (Player vs Environment - PvE) and a competitive battleground (Player vs Player - PvP). In the PvE mode, players follow the quest of Helios, a retro-futuristic cat-like protagonist from Antik. The user will complete quests, talk to NPCs, and defeat opponents to advance the plot. In the PvP mode, Neftie trainers from around the world will compete in friendly duels, ranked tournaments, and other modes that will be unveiled over time. Duels will start as soon as two teams are matched. These battles include a draft system that allows the user to predict their opponent's strategy and react accordingly. Changing the order of Nefties in a player's team to surprise an opponent, can make the difference between victory and defeat.

$AURY is Aurory's multi-utility ecosystem token which players can earn through PvE and PvP game modes, as well as through staking. To stimulate the in-game economy, players are encouraged to spend $AURY tokens in the marketplace for better items and Nefties. In the future, the token will also act as the governance token of Aurory. Thus, holders will be able to vote on important game-development decisions and decide the direction of the game. At the time of writing, $AURY is listed on FTX, Kucoin, Raydium and Orca.

To start staking, the user will need $AURY tokens and a SPL compatible Web3 Wallet such as Phantom or Solflare. The user will also need to have some $SOL in their wallet to cover transaction fees. The amount needed per transaction is very low, so 0.1 SOL will last quite a long time.

Then connect the wallet to the staking application, found at https://app.aurory.io/staking, decide on the amount to stake and confirm the transaction. The same process is applicable if the user wishes to ‘Unstake’. After the approval, the amount staked will be displayed in the ‘Current Aury Amount’ which will allow them to enjoy the estimated daily rewards as well.

Every item acquired in the game can be sold on the marketplace to obtain $AURY tokens. A player can trade Nefties, equipment, consumables etc. Advanced sorting tools and analytics will be available to help the player make the wisest sales and purchases. A percentage of the marketplace fees from both the marketplace and Aurory's online store will be used to support the ecosystem by adding $AURY to the staking pools, having additional PvP prizes, creating PvE loot pools and more.

Apart from having a strong team, Aurory Project also have an experienced group of advisors. One of the leading advisors is Tristan Yver, who is the head of strategy at FTX US. He brings in his expertise to take Aurory to the next level. Aurory Project is currently backed by Solana, Alameda Research, CMS Holdings and Jump Capital, has attracted the interest of major industry players and managed to partner with TSM FTX, which is a global pioneer when it comes to esports.

Aurory Project is a blockchain gaming studio and one of the pioneers in incentivized, blockchain-based gaming on the Solana ecosystem. The platform allows gamers to earn NFTs and rewards in $AURY tokens.

Aurory sets the standard for play-to-earn games by creating innovative and attractive gameplay that also cultivates virtual in-game economies. The company has a mission to encourage the global adoption of cryptocurrencies. It is doing this by introducing gamers to the blockchain through incentivized gameplay, lowering the entrance barriers to web3 gaming and working hard to bridge the gap between web2 and play-to-earn gaming.